A fabulous day’s trade produced the best-ever aggregate and average for the opening session of the foal section of the November NH Sale and the highest top price on Day 1 since 2013.

The €70,000 top lot honours was a two-way split between two fillies – Lot 374 (pictured above), a daughter of the leading French-based NH sire No Risk At All, and Lot 425, a Kilbarry Lodge Stud-offered filly by its first-crop sire Success Days, a son of the late Jeremy.

"I need to sit down after that!" laughed purchaser Paul Cashman of Rathbarry Stud after buying the Ballyreddin Stud-consigned filly, who is out of Jetfire (American Post), a five-time winner on the Flat, also a winner and Listed-placed over jumps.

"In my eyes she is a queen of a filly, probably the nicest you will see here. She is by a very good sire, she is the only filly here by him, and she just has a lot of quality to her with a lovely outlook to her, and size and scope,” enthused Cashman. 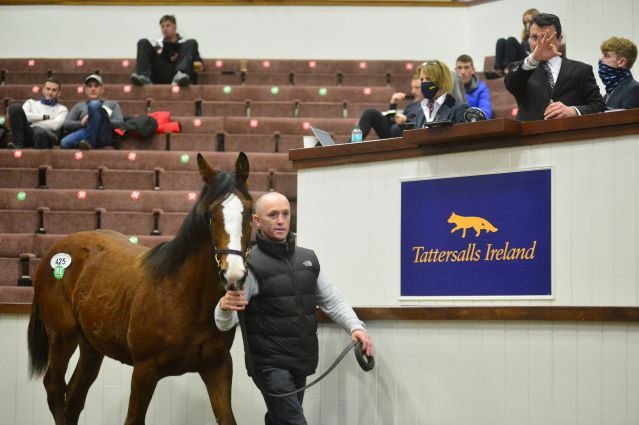 British-based agent Matt Coleman only got to the sale ground today, but he wasted no time in getting down to business when he purchased the daughter of Success Days for €70,000.

"I have bought her for a client, and she has been bought to race and will probably go into training in Ireland," reported Coleman. "I just thought she was a lovely filly, from a fantastic family and Jeremy is no longer with us, so this son is the obvious potential successor. Jeremy was a fantastic sire, so hopefully Success Days can pick up where he left off.

"She is from one of the best pedigrees in the NH stud book. She is a very good moving filly, she is very racy, she has lots of quality and she looks like a racehorse. I like the idea of Success Days, he was a very tough racehorse and, if he is as half as good as his sire, he will be ok." 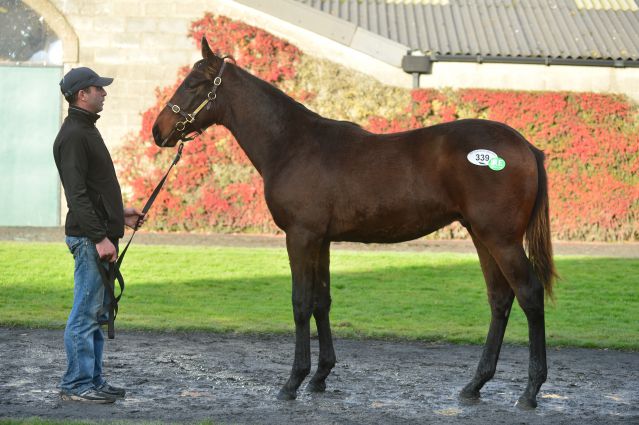 The day’s top-priced colt was by another first-crop sire in this case the two-time Group 1 winner Poet’s Word. The Clonbonny Stud-offered colt (Lot 339), out of the Supreme Leader mare Supreme Breda, dam of the Grade 1 hurdle and Grade 1 chase winner Benefficient, made €62,000 bought by Kevin Ross Bloodstock.

"I was particularly keen to get one by Poet's Word and this is the one I really wanted," said buyer Kevin Ross, whose underbidders included Joey Logan and Tessa Greatrex.

"He is a lovely foal, a proper foal. I have been very keen on the sire, he is stamping his stock and this is a particularly nice model. This foal has a good dam's side, too, he has been bought for a client for resale and stays in Ireland."

The four-day foal section of the November NH Sale continues tomorrow with selling starting at 10am.