A record-breaking Day 4 session and the six-figure sale of the Yellowford Farm-consigned Walk In The Park colt produced a day to remember at the 2022 November National Hunt Sale.

The strong and sustained demand throughout the whole day’s trade contributed to November National Hunt Sale session records – a best-ever average of €24,884 and a matched median of €20,000, increases of 27 per cent and 33 per cent on last year’s session.

Day 4’s top lot is out of the unraced Presenting mare La Bella Roma (Lot 831), and Aiden Murphy / Glenvale had to go to €100,000 to purchase the good-looking colt by the sale’s leading sire Walk In The Park. Ben Case, on the telephone, was underbidder.

Murphy reported: "He looked like the best foal of the day. He is out of a Presenting mare, which is very good, he is for Flash Conroy and will be for resale. We have found it hard to buy anything today and we thought he was the one. You don't get a cheap one by the sire!”

The foal was bred by Michelle and Paul Motherway, in partnership with Paul’s father Frank, who has bred most of the horses on the foal's pedigree page. He bought third dam Fairy Native, and she bred the Grade 1 winner Bellshill.

Progeny by Walk In The Park have topped all three foal sessions so far this week and the stallion is leading the sires’ table by turnover, as well as by average price for sires who have had five or more lots sold this week.

After a good sale on Day 3 (Lot 482 by Nathaniel and out of Limini sold for €75,000), Peel Hall Stables and Future Bloodstock Ltd repeated the feat, and twice in succession.

After getting €82,000 for their No Risk At All filly (Lot 770), a three-parts sister to the two-time Cheltenham Festival Grade 1 winner Allaho, a first foal out of the Grade 2-placed mare Shanning (Spanish Moon), Paul Cashman of Rathbarry Stud went to €78,000 for their Nathaniel colt out of Whenskiesareblue (Lot 771). 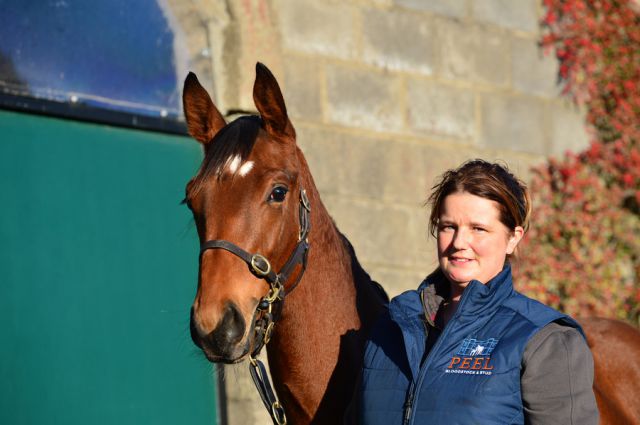 Paul Murphy signed for the filly and said: "She has been bought for a client of Guy Petit, he is my brother-in-law. Guy was here yesterday and saw the filly, but he had to leave before she sold today. She is a sweet filly, will go to France, will be raced and then retained as a breeding prospect."

After Cashman bought the Nathaniel colt he said: "There will never be many by the sire who come to sale and he is a great sire under both codes – he had a Derby winner this year, but he is good with his jumpers, too. This colt is out of a Presenting mare, he is a lovely horse with size and scope, he has it all. His half-sister Letterston Lady looks very good, and, hopefully, he will come back to the Derby Sale and do the same again.”

Peel Hall Stable’s Will Kinsey, standing outside the sale ring with Future Bloodstock Ltd's Ross Alberto and David Greenway, was understandably all smiles after the two sales.

He recalled: "Shanning was in training with Willie Mullins and we bought her privately. We sent her straight to France for her cover for obvious reasons – we really believed that Allaho was going to be a superstar, and that was before he won at The Festival.

"The mare is pure quality, and this foal has been great. She has been an absolute star – she was posing for pictures this morning!"

Peel Bloodstock’s average price for six sold is €50,167 and the farm is currently the week’s leading consignor by average for more than two foals sold.

The five-day foal section of the November NH Sale continues tomorrow with selling starting at 10am.