The amazing trade seen on Day 1 of the Derby Sale continued apace into Day 2 resulting in a recording-breaking average and median price for the sale. Over the two days, the sale achieved its best-ever average of €54,018 and median of €48,000 produced by an 86 per cent clearance rate, which saw 299 lots sold from 347 offered. Twenty-four lots sold for €100,000 or more, and the turnover over the two days was €16,151,500. Day 2’s average of €56,698 broke the record achieved in a single session of the Derby Sale.

Geldings by Walk In The Park, the sale’s leading stallion, filled the top two spots with the half-brother to The Bosses Oscar (Lot 389) leading the way selling for €280,000. He is the most expensive National Hunt store horse sold this year.

There was plenty of interest in the Ballincurrig House Stud-consigned three-year-old gelding, but it was Eddie O'Leary, bidding from the balcony, who was the successful purchaser. MV Magnier was underbidder.

"He is for Bective Stud and he goes to Gordon Elliott," said O'Leary. "Gordon has the brother, who is quite a good horse, but this is an absolute king of horse. He is by what looks to be a top-class young sire. I hope he is half as good as he looks." 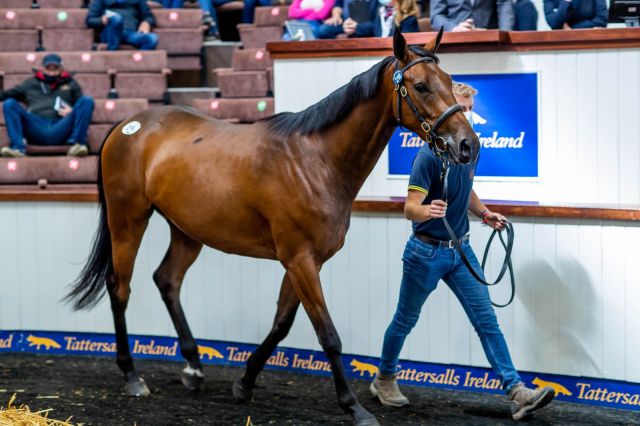 The Walk In The Park three-quarters brother to the 26-time winner and two-time Champion Hurdle winner Hurricane Fly (Lot 216) was bought by Michael Shefflin and Paul Holden for €200,000.

"Two years ago we bought the full-brother to Douvan, so there was a bit of a connection," recalled Shefflin, who had opened the bidding at €100,000. "This was a real sought-after horse that way, too. Hurricane Fly, what can we say, he's did it all!

"But this is a flawless horse, we loved him. He is three-parts brother in blood to Hurricane Fly, but it was down to the individual, I could not fault him."

Consignor Paul Motherway of Yellowford Farm said: "Thrilled, it is a great result for the farm, it is a lot of hard work for the farm and it is great when it pays off. To be fair, it is all the horse, he is very easy to do, very straightforward, he has never given a day's trouble, he has a great mind." 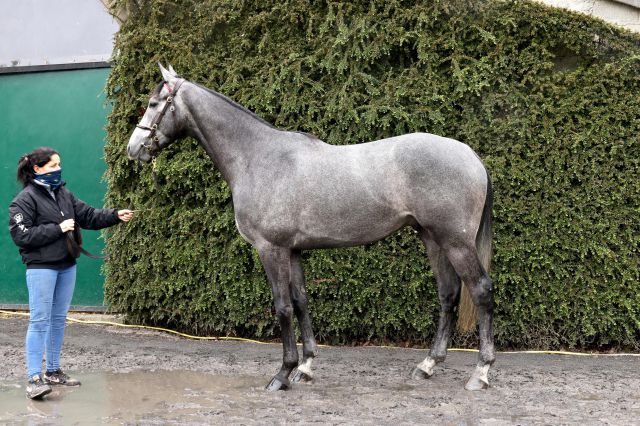 Just two geldings by Authorized were offered over the two days – both were bought by trainer Stuart Crawford and Highflyer Bloodstock, the second purchase costing €155,000 (Lot 351).

"He will be running in the 'double green', as will the horse we bought yesterday," said Crawford. "The sire has done well for the owners. This is a nice horse, an athletic horse. He is a bit more mature that yesterday's purchase so should be one to come to hand a bit earlier."

Anthony Bromley speaking from England said: "He has been bought for Simon Munir and Isaac Souede, who own the Authorized homebred gelding Raffles Face. He is the joint leading four-year-old in France and won a Grade 3 ten days' ago. Understandably we are fans of the sire. This horse has a lovely pedigree, he is a very exciting prospect and we are very excited to get him."

Sold by Kilminfoyle House Stud, the grey gelding is a half-brother to Boldogsag, a Grade 3 winner in France.

"Once again, the Tattersalls Ireland Derby Sale has produced outstanding results and demonstrated extraordinary resilience under testing conditions. The sale has produced average and median prices second to none and to have witnessed such vibrant trade over the last two days has been truly magnificent. Despite the last minute COVID - related changes to the protocols which had been carefully formulated to allow the safe attendance of a small number of UK based buyers, the Derby Sale yet again performed to an extraordinary level as evidenced by a record average of €54,018 , a record median of €48,000, a top lot of €280,000 and 24 lots being sold for €100,000 or more.

More than ever, we should take this opportunity to record our thanks and appreciation to all those who have contributed to the Derby Sale. In particular we must thank our loyal and understanding UK purchasers who have borne the brunt of the last minute disruption, but have continued to use every possible option to participate successfully in the sale. Similarly the solidarity and support shown to us by our loyal vendors has been heart-warming and we are especially pleased to see them duly rewarded in the sales ring over the last two days.

The figures recorded by the Derby Sale speak for themselves and truly hammer home why this sale is consistently the best at every level. The highlight of day 2 was selling the most expensive store horse sold this year for €280,000 and he headed trade of true strength and depth that reflected the quality of the stock entrusted to us by so many leading vendors who continue to send their best store horses to the Derby Sale.

Nevertheless, while we are delighted that the 2021 Tattersalls Ireland Derby Sale has shown such vibrance, there can be no doubt that this would have been an even more successful renewal without the last minute disruption encountered by so many of our leading buyers. As we noted yesterday, the turn of events on the eve of the sale have wider implications for the industry and we will now take time to review the remaining 2021 Tattersalls Ireland sales programme with all our key stakeholders and the relevant state agencies and advise of any updates in due course. In the meantime we applaud the patience and determination of all those who, in the face of adversity, have contributed to the success of this week’s sale and we look forward to following the newest Derby Sale graduates as they begin their career on the racetrack and fly the flag for a sale that represents the very finest of Irish National Hunt breeding."