After a consistent week of record-breaking sessions and vibrant trade, the 2021 renewal of the November NH Sale has seen the highest turnover on record since 2007 (when it was a 14 day sale) with an aggregate of €15,758,100.

However, the best was saved for last, the four-time Grade 1 winner Benie Des Dieux (Lot 1253), the expected headline of the concluding NH mares’ section, sold for €350,000 creating a new record price.

A packed ring welcomed the talented racemare by Great Pretender, offered by trainer Willie Mullins’s Closutton Stables and in-foal to the popular Walk In The Park.

"Bids rained in from around the ring, including from Cormac Farrell, Will Kinsey and Ross Doyle, as well as online, but it was Coolmore's Gerry Aherne, bidding on the balcony, who was successful.

"She has been bought for MV Magnier in partnership with Noel and Valerie Moran of Bective Stud, and she is the first horse they have had together," said Aherne. "Noel and Valerie are putting together an incredible broodmare band and we are delighted to be involved with them. Plans are fluid, the first job was to get the mare bought."

Of Benie Des Dieux, Aherne added: "Willie said to me this morning that of all the mares he has sold he thought that she was the queen. She looked stunning today, and she was turned out incredibly well. I am delighted for former owner Rich Ricci, too, he is another who supports Irish racing at a high level."

Of this week's trade at the November NH Sale, he added: "It has been an incredible week. This country is amazing – the breeders around this country they are amazing what they can produce.”

"Two lots previously the Grand National (G3) runner-up Magic Of Light (Lot 1251) sold for €185,000 bought by Kieran Mariga’s Coolmara Stables. It is a second time this week that the farm has been involved in the transaction of a leading lot – on Wednesday the farm sold the top-priced foal, the Crystal Ocean colt out of Daydream Beach (Lot 861) for €120,000. 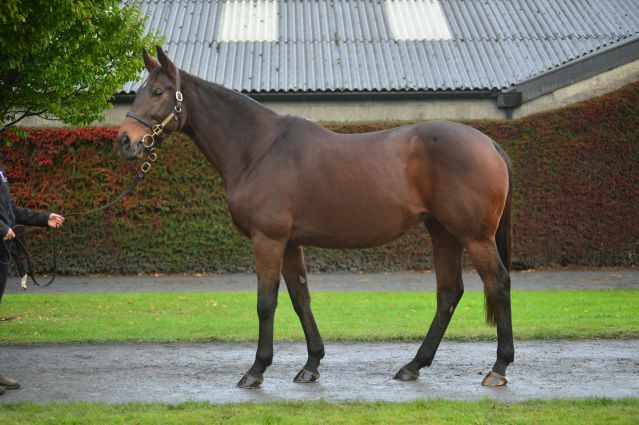 Mariga and son Cathal were standing at the top of the stairs, with Mariga Jnr in charge of bidding. He positively batted back attempts from Kinsey, as well as an online bidder, for the successful purchase of the Flemensfirth 10-year-old mare, sold carrying to Crystal Ocean.

Mariga Jnr said: "She is a lovely strong mare with a good walk. She has a great pedigree and it is a great honour to be able to take her home. We haven't thought about plans yet, we will foal her down and see what the foal is like – she might go back to the same sire."

The mare was consigned by Baroda Stud, offering her on behalf of owner Ann & Alan Potts Limited. She had been trained throughout her career by Jessica Harrington and daughter Kate Harrington was on the sales ground to see the mare sell. 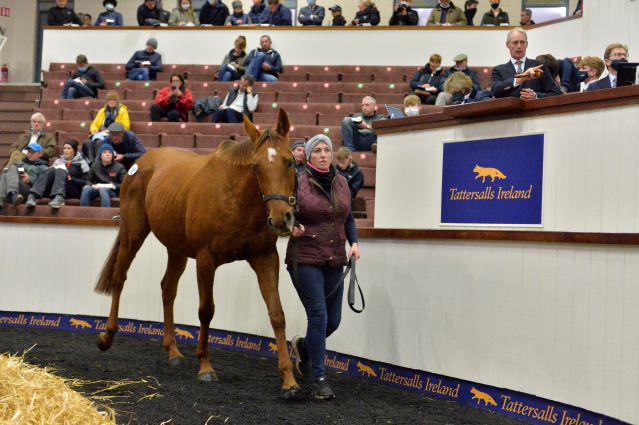 "It has been emotional seeing her go," she said, "but she has gone to a lovely farm. She did us all proud throughout her career. I bought her with Stephen Kemble and I rode her to win a bumper in my own colours. That was special at the time. It is amazing what she did in the Grand National, it is a pity COVID happened – that year she was in the form of her life."

“What an amazing couple of days we have witnessed at Tattersalls Ireland as the November NH Sale reached unprecedented heights with a trade that was simply extraordinary. The November NH Sale continues to be such a strong hallmark sale for breeders and the 2021 renewal is one that only adds to the story in a hugely positive way. The Sale kicked off with the highest turnover for a yearling session since 2015, setting the tone for a week of tremendous highs that saw records continue to fall with the turnover, average and median all making huge gains on the previous decade.

Since last weekend, Tattersalls Ireland has been buzzing and it was fantastic to have welcomed huge crowds of buyers from home as well as an increased number of buyers from the UK, France and Czech Republic, alongside several new faces. Our foal session set records for a four-day sale and to break the €5,000,000 barrier on Tuesday was remarkable. The highlight of the foal section came on Wednesday afternoon with the €120,000 top lot from Coolmara Stables, which sold to Kevin Ross & Ben Case on behalf of Lady Jane Grosvenor. He headed a trade of true strength and depth that reflected the quality of the stock on offer. The sale was a superb representation of the cream of the 2021 foal crop with so many leading breeders continuing to sell their best in November at Tattersalls Ireland.

The Breeding Stock Sale continued the trend with top prices of €350,000, €185,000, and €165,000 to buyers from France, Ireland and UK illustrating the enduring appeal for the best NH broodmares, and they were the highlights of another incredibly strong renewal of our mare and filly sale with strong trade which enjoyed a record top lot.

On behalf of all the team at Tattersalls Ireland, I extend our appreciation to the vendors for giving us the opportunity to promote their top-class yearlings, foals & breeding stock and to each and every one of our buyers. We look forward to many of the foals returning to Tattersalls Ireland sales ring as three year olds in 2024..”