First Store Sale off 2022 off to a flying start

For the first time since 2019 the Tattersalls Ireland May Store Sale was able to be held on its scheduled date, and the numerous point-to-point trainers in attendance, all seeking next year’s leading four-year-olds, produced a vibrant day’s trade.

Competition was strong for the top lots, horses by young NH sires were in particular demand, and the one-day session was topped by a son of Affinisea (Lot 179), sold by Knockalane House to Denis Murphy’s Ballyboy Stables for €50,000.

"He is a fine, big horse, a gorgeous horse," said Murphy. "He was my pick of the sale. We will get him home, break him in and, please God, we will be back for a point-to-point in the Spring."

Affinisea, a son of Sea The Stars, has had four Irish pointing winners through the 2021-22 season from his first crop of four-year-olds and Murphy added: "I have not had one by the sire yet, but they have been beating me! I love the cross and the fact that the mare is by Jeremy."

The gelding’s unraced dam Knockalane Hill is a half-sister to the Grade 2-placed On Fiddlers Green.

A son of the repatriated stallion Workforce, whose first Irish-bred crop are four-year-olds, was bought by Colin Bowe’s Milestone Bloodstock for €48,000 from Rathyork Stud (Lot 103).

"We had a nice filly called Southern Babylon by Workforce, and we've been beaten by a few by him as well; some of his have been very good in the point-to-points this year and they look like they will stay and jump," said Bowe. "This is a big, strong horse, he has size and scope."

The gelding is out of the Presenting mare Blazing Dawn, a daughter of the dual Listed winner and Grade 3-placed hurdler Blazing Sky and a half-sister to Riverside City, winner of the Troytown Handicap Chase (G2).

Workforce, who topped the sires’ table by aggregate and by average (three or more sold), was also responsible for Raheenduff Stables’ sale of Lot 148 to Harley Dunne for €42,000. The April-born gelding is out of Gaye Flora (Alflora) from the deeply talented family of Black Humour, Simon and the 1983 Champion Hurdler Gaye Brief. 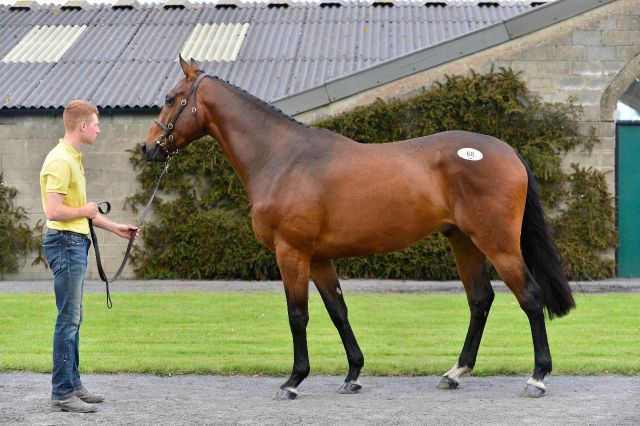 "He is a racy type of horse, I bought him for myself to bring home and get going," outlined Logan. "He has come from a good team of lads, I am not sure yet of long-term plans, we will see if he is going to head to the track or go down the point-to-point route. There are plenty of options for him."

"I have bought a few by Buck's Boum, but they are young horses and have not run yet. This mare was good herself and I hope this horse is lucky."

Of the new improvements to Tattersalls Ireland sale and paddock ring area, unveiled at the sale, Logan added: "It is brilliant, a great job, it is making a huge difference when you are showing horses. It is much safer for everybody, too."

Former NH jockey David Mullins bought a number of lots through the session, including a €42,000 purchase of Lot 154, a Well Chosen gelding consigned by Clonmethan Farm. The three-year-old is the first foal out of the two-time-winning Flemensfirth mare Grange Hall from the family of Grade 2 winner Celestial Wave.

“Today saw the first store sale take place on its’ original dates for the first time in two years and the trade has been very strong. Most noteworthy was the record clearance rate which increased to 80% and turnover that surpassed the 2018 and 2019 May Store Sale sessions. We extend our thanks to our vendors for providing us with quality horses as well as every purchaser who engaged as they sought to find their next star.

We welcomed a large contingent of Irish and UK clients to the newly refurbished sales complex at Fairyhouse as well as many first-time visitors who certainly contributed to today’s trade. Point-to-point handlers relish the early timing of the May Store Sale and were out in force securing their stock to go to war with next season. Albeit a relatively new sale in the calendar, a high percentage of lots sold to the UK further endorses the sales growing reputation both in the ring and on the track which has been highlighted by recent Grade 2 Aintree Bumper winner LOOKAWAY.

We now look forward to the market leading Derby Sale which takes place on Wednesday 22 and Thursday 23 June. The team are very much looking forward to welcoming back all of our clients and offering the cream of the Store Sale crop.”