For the second year in succession, the Tattersalls Ireland Goresbridge Breeze Up Sale produced an outstanding set of record-breaking results with a new record top price of €520,000, the first time in the sale’s history that the half million mark has been topped.

The vibrant action throughout the one-day session, the sale back at its Fairyhouse venue for the first time since 2019, produced a record turnover of €6,639,000, as well as a record number of six-figure lots at 11, including four lots that sold for €200,000 and over.

The day’s cosmopolitan buying bench means that purchased lots from Europe’s most progressive breeze up sale are due to embark on racing careers in many different global locations including Dubai, Germany, France, Italy, Sweden, the UK, and also in Ireland.

Katie Walsh’s Greenhills Farm, who sold a previous Goresbridge Sale record-breaker when the Grade 1 and Classic-placed Frankel filly East topped the sale in 2018, repeated the feat this year with a filly by Saxon Warrior (Lot 151), who was sold on behalf of James Hanly’s Ballyhimikin Stud.

The chestnut filly is this year’s third-most expensive European breeze up filly. She was bought by agent Stephen Hillen on behalf of a new client and she goes into training with Kevin Ryan.

Hillen described the filly as “freakish” after her breeze on Wednesday.

"She is a completely different shape to East, but this filly kind of reminded me of East’s breeze – it was almost freakish,” he enthused. “This filly is bred to go a mile plus or 1m2f, with her pedigree she should not be able to do what she is doing, and she is a big, raw individual. Hopefully, once she is able to go a mile, then her speed could be massive.”

A delighted Walsh said: "I think everyone was quite surprised with the time that she did compared to the physical that she is. I was lucky enough to sell East to Stephen Hillen at the old Goresbridge venue and I hope this filly turns out as lucky.

"I knew coming here that she was going to clock well, I had a fair idea that she is a tasty filly – all she had done is please me since I have had her. She has always been a straightforward filly with a great galloping stride and a great attitude. With these fillies it just comes so naturally to them, it is just different gravy.”

Joe Foley was a determined buyer of the Night Of Thunder filly out of the Oasis Dream mare Gadwa (Lot 189) sold by Grove Stud for €270,000.

"I loved her as a foal – I was stood beside David Ryan when he bought her then and I have regretted not buying her ever since," said Foley. "I saw her on video three nights ago and said, 'I am buying her this time!'

"I loved her breeze, she is a beautiful filly and it is the lovely Night Of Thunder / Green Desert cross, Dancing Brave features three times in the pedigree. She is beautifully bred, it is a deep family and she is gorgeous. She goes to Karl Burke."

“He is going to Andrew Balding, and for owner Michael Blencowe,” reported Jackson-Stops. “We have waited a while to fill the order, Michael is a big supporter of Andrew’s and has a runner in the Tattersalls 2,000 Guineas on Saturday. We have been to three breeze up sales and not really got there, but Michael really liked this colt, and Andrew really liked this colt, too. He ticks the boxes, he is from a good consignor, he is a decent horse and has a decent pedigree.” 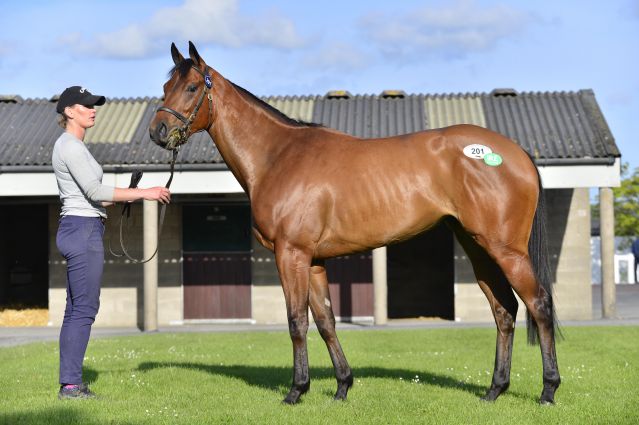 Blandford Bloodstock bought five lots through the session and went to €210,000 for Hyde Park Stud’s Gleneagles filly out of the Bernardini mare Heartlines (Lot 201). It was a great pinhook result for the farm who purchased her as a yearling for just 12,5000gns at last year’s Tattersalls October Book 3 Sale.

“Today's trade has been outstanding. We are thrilled that the sale returned to its rightful place in Ireland and produced record breaking results. A remarkable record top price of €520,000 headed eleven horses selling for €100,000 or more and we are delighted that the faith placed in Tattersalls Ireland by both James Hanly and Katie Walsh has been repaid aplenty. Our sincere thanks go to both and all our other vendors who have provided us with quality two-year-olds.

The top price is the highest price ever achieved at Tattersalls Ireland. It was fantastic to watch the fierce competition between leading purchasers for this filly and others and proves that when we are provided with the best horses we can deliver. Our hope is that these results and our improved facilities will continue to convince more consignors that they can and will achieve the very best results in the Tattersalls Ireland sales ring.

The sale produced a healthy clearance rate of 85%. The demand we enjoyed has been driven by a truly international buying bench with a flood of overseas buyers with significant parties from UAE, Scandinavia, Germany, Spain, and Italy taking on spirited bidders from the UK and Ireland. To surpass last year’s record figures achieved at Tattersalls in Newmarket last year was extraordinary.

We must also extend our thanks to Charles O'Neill and the team at Irish Thoroughbred Marketing who worked so hard on bringing the abundance of overseas buyers and the team at Fairyhouse Racecourse for providing us with an excellent safe surface. We turn our attention now to inspections for the September Yearling Sale and putting together a high calibre catalogue to attract a strong bench of purchasers back in September”