This year’s sale saw a record 70 horses sold for €50,000 or more and an outstanding clearance rate of 90 per cent to match last year's session.

Six horses sold for six-figure sums, matching the number to achieve that mark in 2021, and the sale’s top lot was just the third horse into the ring through Day 2’s morning session.

By New Bay, Lot 243 was bought by agent Alex Elliott from Shane Power’s Tradewinds Stud for €115,000, the colt having been pinhooked as a foal for €24,000 by Windlestone Investments.

Elliott admitted after the purchase that he is something of a "New Bay addict".

"The sire has been very good to me, and this is my favourite horse of the sale," smiled Elliott. "His sister is by Make Believe [All Lies Ahead] and so a three-parts sister – she won a maiden this year and has bounced into the pedigree.

"I think New Bay is a superior sire and I can't get enough of him. It can be hard to get one by the sire as good looking as this horse, but they all look as though they will run through a brick wall. This is the one I wanted to buy, and I think he has a chance of being a good horse."

The colt won't be in Ireland for long, Elliott was buying on behalf of Australian-based Spicer Thoroughbreds. 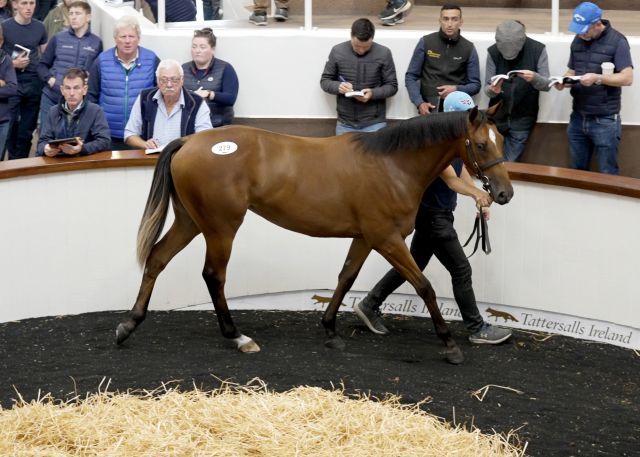 Three horses shared the Day 2 second-best spot and an auction price of €100,000, Highflyer Bloodstock responsible for purchasing two of the trio – a filly by Inns Of Court (Lot 279), another by the sire to sell for six-figures following the sale of Day 1’s top lot, and a colt by this year’s exciting first-season sire Sioux Nation (Lot 390).

"The filly has been bought for Simon Munir and Isaac Souede," said Anthony Bromley, explaining that the joint-owners are planning to extend their Flat string. "We bought three yesterday and we also tried on the top lot colt.

"I have been very taken by the stock by Inns Of Court and she was definitely more than the budget I had proposed, but she was a three-star horse all week and stood out. We weren't necessarily looking for a filly here, but she was my pick. She goes to Joseph O'Brien." 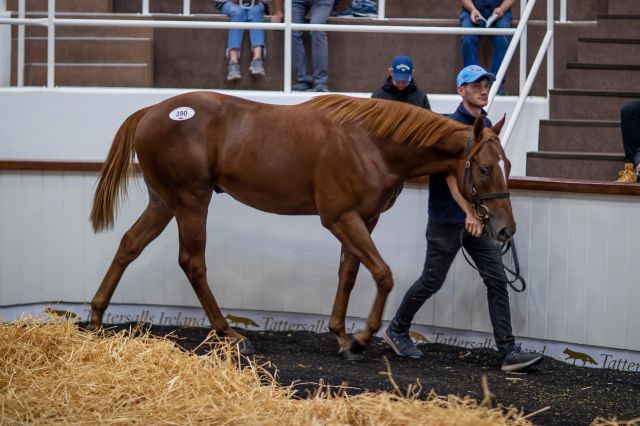 Of the Sioux Nation colt, he said: "He is a big scopey horse, and is by a red-hot stallion. He has been bought for Andrew and Jane Megson, owners of the May Hill Stakes (G2) winner Polly Pott and this colt’s half-brother Severance, who is one of the five winners out of this colt’s dam. This colt will be given lots of time and will be joining trainer Ben Pauling.”

Pauling also trains Severance, and Polly Pott will be heading to the same yard later this year. 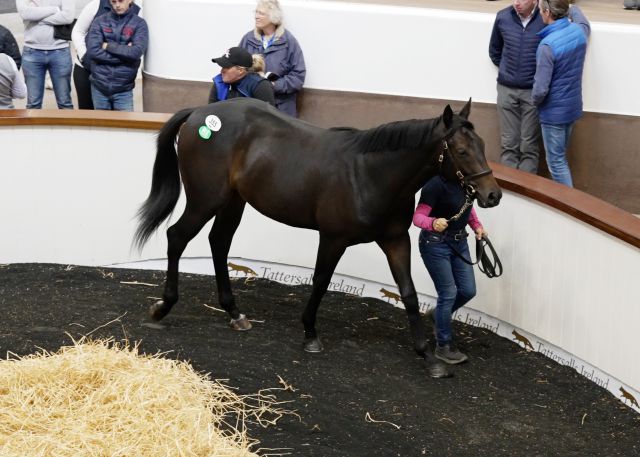 It was happy days on both sides of the transaction of Lot 355 – the Bated Breath colt bred and sold by Coole House Stud out of the Cape Cross half-sister to the Group 2 winner Captain Marvelous, bought by Joe Foley.

The farm was thrilled that Foley purchased the horse on behalf of Clipper Logistics, Barbara Fonzo saying: “We are delighted Joe got him – we have been trying to sell him a horse for a long time!".

In turn Foley said: “This is a lovely colt from a fantastic farm, Mark Dreeling and Barbara Fonzo are great breeders. It is a pleasure to buy one from them. He will run in the colours of Clipper Logistics and is the first bought this autumn for Clipper.”

It was the second €100,000 sale for Coole House this week from just three lots consigned, but Fonza gave all the credit to the colt.

"He is a gorgeous horse, he sold himself, he did not need much help from us," she said. "It was a big adventure producing him because we took the mare to England on a 24-hour walk-in to Juddmonte. Everything has gone so well – she went in-foal straight off, he is correct, a straightforward horse, and he can walk for Ireland.”

Commenting on the conclusion of the September Yearling Sale, Simon Kerins said:

"This week saw the September Yearling Sale take place in Ireland for the first time in two years and the trade has been incredibly strong. Most noteworthy was the record number of horses selling for €50,000 or more and turnover that surpassed all previous sessions held in Ireland.

"We had a catalogue of quality yearlings catering for all sectors of the market and the footfall seen across the last few days has been phenomenal. We focused extra attention on welcoming buyers back to Fairyhouse and we were rewarded with the buzz that was felt around the barns and newly improved sales complex. Purchasers descended in their droves from the UK as well as a strong contingent of overseas buyers who all went to battle with a strong Irish buying bench.

"We would like to thank the vendors who supported us and purchasers, all of whom have contributed to the success of the past two days. Our thanks also go out to Irish Thoroughbred Marketing who have been exceptional to work with on the lead up to the sale and enticing customers with their excellent IRE Incentive Scheme. The sale has displayed a remarkable resilience the last two years and we look forward to moving ahead with it now and continuing to build on it year on year."

Part II of the September Yearling Sale begins tomorrow at 10.30am.

View catalogue for Part II of the September Yearling Sale