A colt by No Nay Never, the sire of three Group 1 winners including this year’s Coronation and Sussex Stakes winner Alcohol Free, topped the first day of the two-day Tattersalls Ireland September Yearling Sale, staged for the second year in succession at Park Paddocks, Newmarket.

"We brought him here to stand out," said Paddy Fleming, manager of Castlehyde. "The mare has been good to us – Sarsons Risk [2019, Caravaggio] looks quite promising and was third first time out at Newbury and is due to run at Newmarket on Thursday.

"This colt is a very straightforward horse, he vetted well. He was born and raised at Castlehyde, born and raised on limestone land, and he has grown into a grand yearling. Numerous people viewed him, and he was an easy sell really. The mare has a lovely Ten Sovereigns colt, and is in-foal to Wootton Bassett." 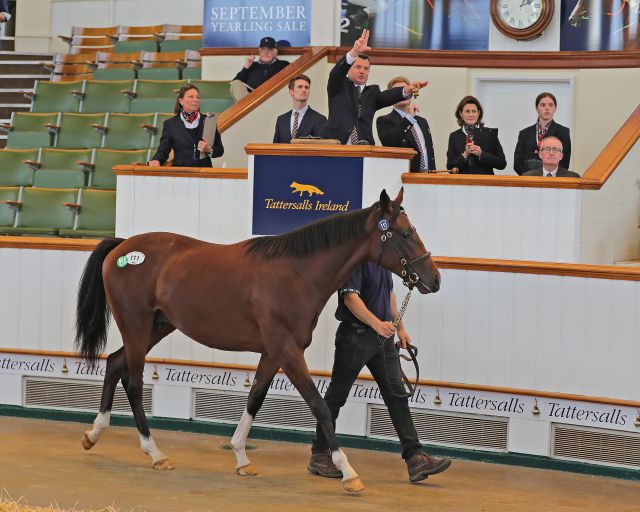 A colt from the second crop of Churchill made £110,000 (Lot 111), sold by breeders Mark and Stephanie Hanly of Grange Hill Stud. The bay colt is out of Komedy (Kodiac), who was bought at the 2015 Tattersalls Autumn Horses In Training Sale for just 9,000gns. She is already the dam of the Molecomb Stakes (G3) third-placed Internationaldream (Acclamation).

Breeder Mark Hanly was delighted with the decision to offer this April-born colt in the September Yearling Sale.

"He is a very taking individual and I thought to myself that he'd be stand out at this sale. He is a magnificent looking animal and, it is early days, but the sire is ticking all the boxes," he said.

"It is a very nice fast family, and he is out of a Kodiac mare and they are working very well at the moment on the track. He is just a magnificent colt and it is a very good sale to have had him in.

"Komedy is a typical Kodiac and when I first saw Churchill at stud, I absolutely loved him. He has a big physique and would suit a Kodiac mare, and the cross suited, too – Galileo over Danehill.”

Adam Driver said: "I loved this horse. We have two Churchills in training with Tom Clover, both of which are really nice. We like what we have got so far." 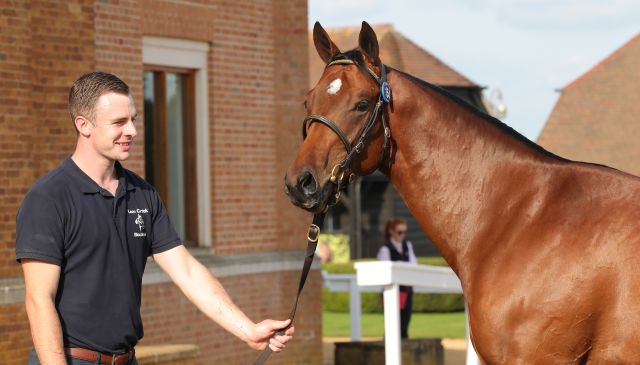 A six-figure price was also achieved by Lot 154, a colt by first-season sire Ardad, sire of the Group 1 winner Perfect Power, sold by Leon Carrick Bloodstock to Robson Aguiar. He went to £105,000 on behalf of client Amo Racing.

Last December, Carrick, who works as a guard, had come in off a night shift and was keeping an eye on the progress of the Tattersalls December Foal Sale from his bedroom in Ireland.

"It was online shopping!” laughed 27-year-old Carrick. “I came in after work, loved him when I saw him on the video, how he walked, how he showed himself. I got a friend of mine, who was at the sale, to check him out and lucky enough he got him for 7,500gns. Never in our wildest dreams did we expect to get £105,000 for him today.

"He is an absolute gent to do anything with, he never put a foot wrong all winter. He has his little quirks, and you need to get used to them, but he has a great temperament. The hardest part at the sales has been to get him up after he has been lying down!

"I think Ardad breeds a nice temperament into the horse and he definitely upgrades his mares." The session’s top-priced filly was a daughter of Farhh (Lot 81), bought by Peter and Ross Doyle for £90,000 from Nelius Hayes’s Knockainey Stud. She was purchased for trainer Richard Hannon, who had particular reason to select this filly – he trained the Group 1 winner King Of Change, the best so far by the son of Pivotal.

Ross Doyle said: "We have been very lucky buying off Nelius Hayes of Knockainey Stud and she is the nicest filly Nelius has brought to the sales for a few years. She is medium-sized and she has a bit of class to her."

Hayes was understandably delighted with the result having purchased the mare Imasumaq (Teofilo) here in 2019 for 16,000gns and carrying this filly.

"A friend of mine and neighbour Michael O'Dwyer bought her at the Tattersalls December Sale," recalled Hayes. "This has been a fantastic result. Everybody just seemed to like this filly. We had no expectations of anything like that coming here, but as the days go on you get hopeful!

"I am delighted Richard and Ross got her. They are fantastic judges, if she has any luck at all she will win where she is going.”

It was a good day for Hayes – he also sold Lot 215, a filly by Ulysses out of the Listed-placed mare Piano (Azamour) for £62,000 to trainer Richard Hughes.

The sale continues tomorrow at 10.00am.