Eoghan Loughlin was given post-sale reporting duties by his father and said: "We bred his dam Posh Trish, sold her as a foal and bought her back two years ago at the November National Hunt Sale for €118,000.

"This colt has been a lovely foal from Day 1, he came up here and did everything really well, and it is a great price for him. Posh Trish is the quietest mare ever, her temperament is brilliant and her foal's temperament is very good too.“

The Loughlins' also sold Lot 490 to Alan Harte Bloodstock for €57,000, another by Walk In The Park and out of the Alderbrook mare Alleygrove Lass, and Lot 499 for €72,000. The colt foal is out of Hour Before Dawn (Yeats) and by Crystal Ocean.

Hillview Stud enjoyed its best result at Fairyhouse since 2010 when selling its Blue Bresil colt (Lot 529) out of the Fame And Glory mare Chill Time for €82,000 to Michael Fitzpatrick of JC Bloodstock. The Fenton family of Hillview were all smiles after the sale – along with a few tears from mother Kathleen – while father David was responsible for the leading-up duties.

It was another son who oversaw the post-sale quotes and Ken Fenton said: "He is fine big foal, and we are delighted, and he has gone to a shrewd judge.

“Dad bought grand-dam Kilcoleman Lady as a foal at this sale in 2002 and we’ve bred everything out of her – the two black-type runners as well as Chill Time. We have retained Chill Time's Robin Des Champs three-year-old and she goes into training with Willie Mullins." 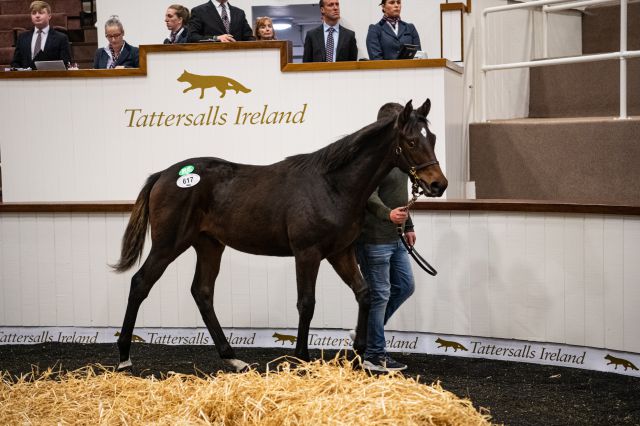 The family farm Ballykineally Stables achieved its best-ever price in the sale ring after selling its Walk In The Park colt (Lot 617) for €76,000 to Brendan Bashford Bloodstock on behalf of Norman Williamson.

“My brother Tom and Mossy are involved and all the family help out at home,” said John Barry after the sale. “It is the best price we have had by far, but we also had a Blue Bresil filly make €38,000 today (Lot 598).

“We bought Whoopsey privately from trainer Henry Daly last year. It is a fantastic pedigree and is only going to get better – there is her half-brother Go Dante who is just a six-year-old, Nicky Henderson has a three-year-old half-sister by Kapgarde and Olly Murphy also has an unraced four-year-old half-sister by Kayf Tara named Little Miss Dante.”

Barry added: “Hopefully he will be lucky for Norman – he is familiar with the pedigree because he bought Go Dante here as a foal and sold him as a store at the Derby Sale for €170,000. We are over the moon with this result and the mare is back in-foal to Walk In The Park.”

The five-day foal section of the November NH Sale continues tomorrow with selling starting at 10am.